While renewable energy has experienced significant growth, in part due to focused policies that promote wind and solar, nuclear has faced a wave of actual and announced early retirements. To understand this potential loss of a significant amount of carbon-free generation, ScottMadden assessed “at risk” nuclear assets to better understand the magnitude of the potential impact on carbon emissions from the U.S. electricity sector.

Our analysis shows the amount of carbon-free generation in the electric power sector that could be achieved if nuclear energy continues to be undervalued by policymakers in comparison to renewables. What is concerning is that even excellent-performing nuclear plants are not immune from early closure.

The fall 2019 ScottMadden Energy Industry Update (EIU) and associated webcast examine the implications of the potential loss of carbon-free generation. Additional information can be found in our latest analysis, a continuation of two earlier reports (here and here).

In order to meet the Paris Agreement goals of 80% decarbonization of the entire economy by 2050, the U.S. electric-generation sector would need to more than triple the amount of carbon-free generation currently provided by wind, solar, hydro, and nuclear. This calculation uses 2018 electricity generation, so the amount of carbon-free generation may be even higher in 2050. Electrification, mainly of light-duty vehicles, is poised to grow overall electricity demand.

In 2018, nuclear generated 54% of all carbon-free generation in the Unites States. Despite significant renewable-capacity growth in the past decade, the risk of early nuclear plant retirements jeopardizes the meaningful gains, achieved by wind and solar, in carbon-free generation. The void left by at risk nuclear is, in fact, filled with carbon-emitting resources. The electric-generation sector does not require a choice between nuclear and renewables, as both technologies contribute to carbon-free generation. Despite significant renewable-capacity growth in the past decade, meaningful gains in carbon-free generation are in jeopardy due to the risk of early nuclear plant retirements.

At risk can be defined as one of four categories:

For each at risk category, ScottMadden calculated total capacity and annual generation. At risk nuclear plants have a combined estimated output of 311,555 GWhs. In 2018, solar, wind, and hydro produced a total combined 666,000 GWhs of carbon-free energy. Thus, if all these at risk nuclear plants are lost, the potential greenhouse gas (GHG) emissions-free output lost is the equivalent of 47% of the total carbon-free energy produced by all solar, wind, and hydro assets currently in the United States. 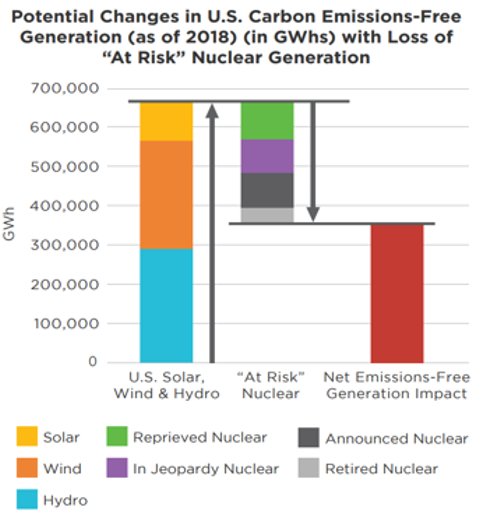 ScottMadden developed a new analysis projecting carbon-free electricity over the next 15 years based on growth in renewables and potential future nuclear plant retirements. For renewables, we estimated growth in generation from wind (onshore and offshore), solar (utility and distributed), and hydro based on forecasts from the U.S. Department of Energy’s National Renewable Energy Laboratory. Those forecasts are generally optimistic views of renewable resource market penetration.

Even using relatively rosy projections of renewables growth, total carbon-free generation barely grows 20% by 2035—a far cry from the more than tripling of such generation needed should the United States want to meet the Paris goals. To achieve deep, quick decarbonization, we will need all existing non-carbon-emitting generation, plus a lot more.

It is important to point out that the chart below depicts total generation, not emissions. Total emissions from the electricity grid has declined in recent years due to the switching from coal to gas. The carbon intensity of electricity generation has decreased, yet it is still dominated by carbon-emitting generation. What Can Be Done?

Since ScottMadden published the fall 2019 Energy Industry Update, Three Mile Island has closed, and other nuclear operators have continued to warn that more early retirements of nuclear generation may occur in the near future. On the bright side, Duke Energy announced that it would apply to relicense its nuclear plants. Duke Energy’s relicensing announcement comes on the heels of its commitment to carbon neutrality by 2050. The announcement to relicense its nuclear plants demonstrates that Duke Energy sees nuclear playing an important role in its carbon-free future. There is still work to be done, as policymakers, market operators, and other utilities must value the carbon-free characteristic of nuclear in order to meaningfully grow carbon-free generation in the Unites States.

To make progress in the decarbonization of the electricity grid, it is necessary to:

What Does This All Mean?

More than 74,000 MWs of nuclear capacity face early retirement, a significant potential reduction in carbon-free power production. Licenses of 35 nuclear reactors will expire in the next 15 years (2020–2035), jeopardizing the nation’s ability to achieve a deep, realistic, near-term decarbonization. Early retirements of all at risk nuclear plants would represent a giveback of 607,122 GWhs in 2035 or roughly 16% of 2018 electricity sales. This loss of nuclear generation represents more than 430 million tons of CO2. This is equivalent to the total emissions of roughly 85 million cars or one-third of all cars on the road today.

For more information about the effect nuclear generation has on the reduction of carbon emissions in electricity generation or to stay ahead of the power curve, you can access this video or download the Fall 2019 Energy Industry Update webcast recording and presentation.

Share
Tweet
Share
View More
Sean Lawrie Partner
This report explores how the progress created by solar and wind carbon-free generation is “at risk” of being reversed due to early retirement of currently operating nuclear plants.
This report explores the shift in nuclear carbon-free generation in the U.S. and implications for our energy future.
Cost reduction is nothing new to the nuclear industry, but the competitive pressure has intensified in recent years. See how ScottMadden is driving innovation and sustainable cost reductions for the nuclear generation sector in this new case study.
This report, prepared by ScottMadden for WIRES, includes a comprehensive overview of the state of play of transmission. It examines, region by region, the challenges posed by a changing energy mix, increasing electrification, and the increasing need for location constrained renewables. The report also discusses growing concerns about the resilience of the North American electric power system and how all of these issues should be considered from an interregional transmission development perspective.