The Case for Hydrogen and Nuclear Cogeneration

Download PDF
This Energy Industry Update (EIU) explores how in the midst of and beyond the COVID-19 pandemic many efforts in the energy industry can feel like running uphill.
This report explores how the progress created by solar and wind carbon-free generation is “at risk” of being reversed due to early retirement of currently operating nuclear plants.
What are the implications of the potential loss of carbon-free generation? This article examines key issues and what it means for the energy future.
Expansion of renewable generation will change the way power is produced. Nuclear power is still a necessity for its steady and reliable output. However, not all of the output may be needed all the time, and, potentially, ratepayers will demand only a fraction of total nuclear power plant capacity. What should utilities to do with the extra power? In the hunt for new sources of revenue, nuclear owners should consider cryptocurrency mining as one of their first ideas.

For more than a decade, nuclear operators have faced an uphill battle to compete with low natural gas prices and increasing renewable generation. Plants have been focused on reducing operating expenses to manage costs and compete in bid-based and regulated markets. As we shared in the article, “While You Were Sleeping: The Unnoticed Loss of Carbon-Free Generation in the United States,” the early retirement of at-risk nuclear plants may give back gains in carbon-free generation from new wind and solar. There is increasing urgency for nuclear plants to increase profitability and avoid premature decommissioning. 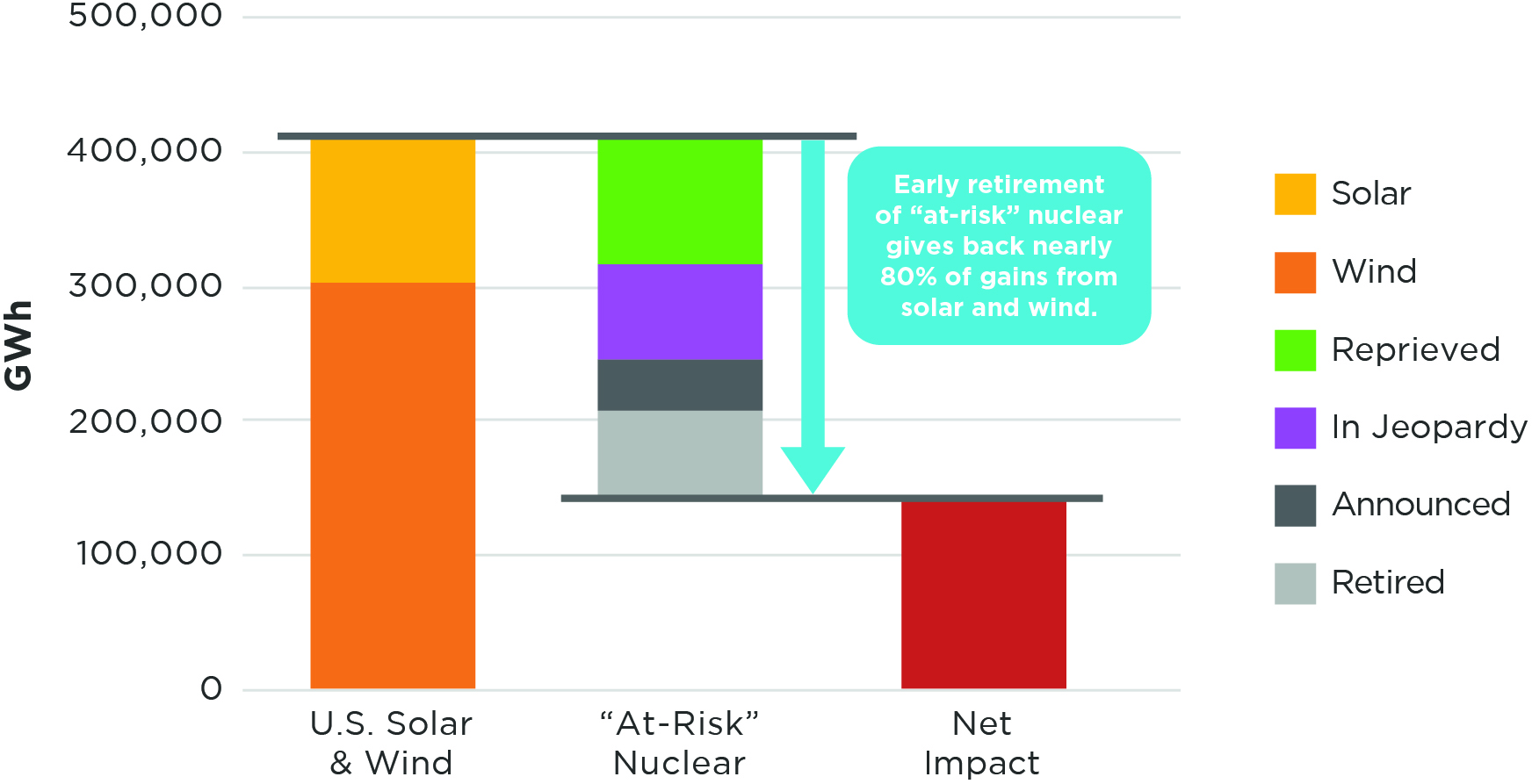 What should plants do when cost savings alone will not achieve the results necessary to ensure nuclear energy maintains its value proposition of carbon-free, reliable, baseload generation? Is there an opportunity for nuclear sites to diversify their revenue streams by using carbon-free nuclear power to make and sell goods other than electricity?

By reimagining the traditional nuclear business model, operators may be able to cut costs, diversify revenue, and help save plants from early retirement.

Several nuclear plants in the United States have begun to investigate the viability of on-site hydrogen cogeneration. Cogeneration’s advantages are four-fold:

A new type of thinking and innovation is necessary for nuclear generation to sustain its crucial role in providing safe, reliable, and carbon-free energy well into the future.

Wind and solar generation presents a unique set of challenges for nuclear operators and grid managers. Renewables produce intermittently. Changes in power output can be frequent and dependent upon local weather patterns, which are hard to predict. This leads to a jagged power profile as seen in the chart below. Solar and wind energy is produced on a semi-predictable day-to-night cycle, but the amplitude varies, and overnight wind production is not consistent. 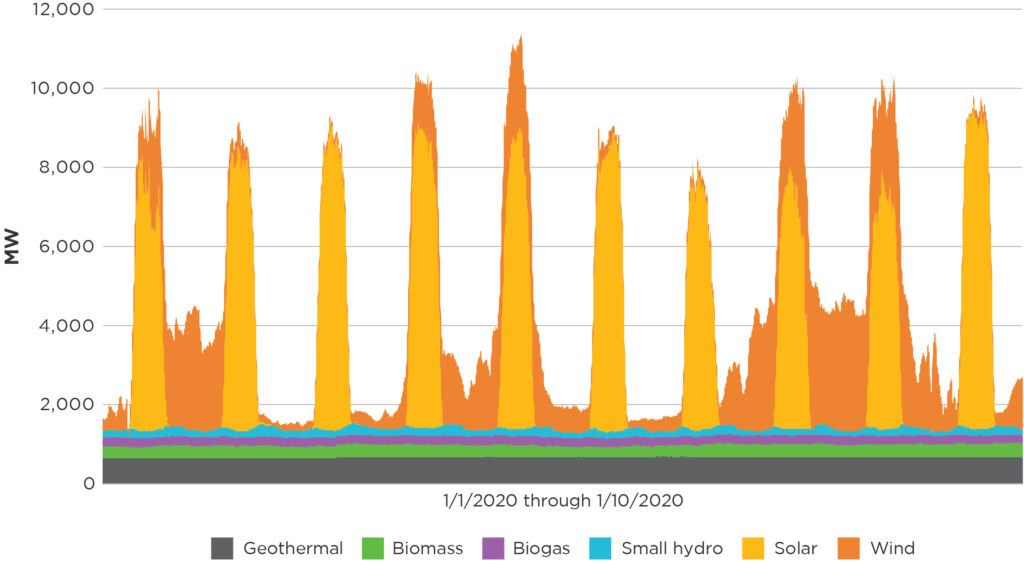 Renewables also produce electricity instantaneously. When the sun shines or the wind blows, power is produced. A renewable plant does not require a long start-up sequence or delicate heating of rotating components. As soon as power is produced, it is sent to the grid. It is also inexpensive to produce the next kilowatt-hour of renewable energy. Operating and maintenance costs are low as plants do not require a large staff, and repairs made to individual components do not upset plant output.

Natural gas plants are able to respond quickly to changes in grid supply and demand. For this reason, they have been billed as complementary to renewables. The decrease in natural gas prices since 2005 has only strengthened their position in the asset mix of many utilities as more wind and solar come online.

Nuclear generation, in contrast, does not produce instantaneously or intermittently. Nuclear plants are not able to start up or shut down quickly. They are much more comfortable operating in a steady state month after month. One way to highlight the differences is to compare capacity factors. The capacity factor is the measure of a plant’s output versus its maximum capacity. U.S. nuclear plants have been producing carbon-free power at a capacity factor close to or greater than 90% since 2000. Combined-cycle natural gas plants in the United States operated at 57% in 2019. Wind and solar operated at 35% and 25% capacity, respectively.

When wind and sun are prevalent across a region, the excess power generated can displace baseload generation. Downward pressure on power prices is often the result. California consistently experiences negative prices, especially on sunny days and when the hydro plant’s reservoirs are full. Europe is wrestling with this phenomenon too. Recently, the spot price for power turned negative for significant periods of time. Germany experienced more than 125 hours of negative prices in 2017 and 2018.[1] The Pacific Northwest has seen negative prices due to the inflexibility of generating sources as far back as 2011.

The multifaceted challenge for nuclear operators is how to meet the demand for dispatchable carbon-free power in a climate of oversupply. Ideally, nuclear power plants would be able to:

Given these competing demands, the consideration and study of alternative uses for excess energy during periods of high-renewable supply is imperative.

Four hydrogen cogeneration projects have been funded through the Department of Energy’s H2@Scale initiative. The first was awarded to Exelon, which plans to install a 1 MW polymer electrolyte membrane (PEM) electrolyser to produce hydrogen on site at a plant in an organized power market. Three additional sites were awarded funding for similar pilots—Palo Verde, Davis-Bessie, and an Xcel plant in Minnesota.

There is a compelling business case to be made for using hydrogen produced on site for internal use. The strength of the business case varies based on the number and size of the units, the number of plants in the fleet, and the type of reactor.

ScottMadden’s research suggests a dual-unit boiling water reactor consuming 30,000 kgs of hydrogen per year could install a PEM electrolyser and produce enough hydrogen on site to meet internal usage requirements and achieve payback within 15 years.[2] This scenario will be more attractive for operators with multiple nuclear and gas plants in their portfolio. Self-distribution of internally generated hydrogen across the entire utility’s generation portfolio could make the business case even stronger.

The table below demonstrates the approximate value of 1 MW-day of hydrogen production. The results can be compared to the production value of electricity and used to start an early internal cogeneration conversation.

Plants that are purchasing hydrogen at prices higher than $3.15/kg will have a compelling business reason to study the installation of on-site PEM electrolysis.

With a look to the future, production costs of green hydrogen equipment are expected to decrease significantly in the coming decade. Per the Hydrogen Council, green hydrogen technology CAPEX will shrink by 60% to 80% by 2030. Europe has plans for 6 GWs of electrolysis by 2024 and 40 GWs by 2030.[3] Advancements and maturity in electrolysis technology are expected to contribute to price reductions over time.

With another revenue stream available, the economic proposition of a nuclear plant changes. When revenue from the sale of electrical power drops below that of hydrogen produced by that same power, electrolysis is placed in operation. The commodity with the highest profit potential receives priority. Tracking the market to determine the most profitable commodity to produce will become a daily decision for plant management in the years after installing electrolysis.

Hydrogen and the Electric Utility

Generating hydrogen on site for internal use is just the beginning of the potential positive financial impact hydrogen cogeneration can have on nuclear plants. The possibility of producing, storing, converting hydrogen back to electricity, or selling the surplus to willing buyers also exists.

For utilities and electric power producers, self-produced hydrogen can be blended with natural gas and used as fuel in existing gas turbines. Siemens Gas and Power has set targets for all gas turbines to operate on 100% hydrogen as a fuel source by 2030.[4] Many turbines can now function on a mix of natural gas and 3%–30%+ hydrogen. For operators with multiple generation resources in their portfolio, blending with methane is another compelling reason to explore hydrogen. As a sign of this trend, the Los Angeles Department of Water and Power announced a power plant that will be capable of burning 30% hydrogen and 70% natural gas. Over time, the plant will be converted to burn greater quantities of hydrogen.[5]

The grid can benefit from the incorporation of strategic hydrogen production throughout the system, not just at individual plant sites. Installing a hydrogen system beyond the switchyard or inverter can add an additional level of flexibility to an entire system. If the hydrogen delivery infrastructure is built close to a natural gas plant, it can be transferred by pipeline, mixed with methane, and used as a combustion fuel.

Nuclear plants potentially have a significant role to play in the expanding hydrogen economy. The urgency for nuclear operators to reimagine traditional business models has arrived with the premature closure of plants across North America. A partnership between nuclear and hydrogen may, in the future, maintain or increase revenue for owners and investors.

Cogeneration could be a key component of staving off premature nuclear decommissioning. Starting with small on-site electrolysis will build confidence and experience with the new process. As the hydrogen economy grows, a nuclear plant’s capabilities can grow along with it adding modular electrolysers over time. We see the possibility of the total conversion of nuclear power plant production away from grid-supplied electricity and toward carbon-free green hydrogen.

We see the need today for utilities and power producers to consider developing a hydrogen strategy. Where will hydrogen be produced and used? Which technology enhancements and conversions will be necessary to integrate larger amounts of hydrogen? What changes in legislation will drive the production and use of hydrogen in other sectors of the economy, and how can utilities position themselves to be leading producers of green hydrogen? Hydrogen and nuclear cogeneration may be just one component of a broader strategy in the years ahead.

How We Can Help

ScottMadden helps clients in every aspect of the nuclear power business. We work with our clients to build tailored solutions designed to deliver value from traditional and unexpected parts of the business. Our deep acumen in generation and utilities helps operators achieve safe, efficient, and profitable plants.

[2] This analysis assumes a market price of hydrogen of $14/kg of H2 (internal analysis) and a cost to produce hydrogen on site of $3.15/kg (Platts).

Share
Tweet
Share
View More
Ed Baker Partner
Sean Lawrie Partner
This Energy Industry Update (EIU) explores how in the midst of and beyond the COVID-19 pandemic many efforts in the energy industry can feel like running uphill.
This report explores how the progress created by solar and wind carbon-free generation is “at risk” of being reversed due to early retirement of currently operating nuclear plants.
What are the implications of the potential loss of carbon-free generation? This article examines key issues and what it means for the energy future.
Expansion of renewable generation will change the way power is produced. Nuclear power is still a necessity for its steady and reliable output. However, not all of the output may be needed all the time, and, potentially, ratepayers will demand only a fraction of total nuclear power plant capacity. What should utilities to do with the extra power? In the hunt for new sources of revenue, nuclear owners should consider cryptocurrency mining as one of their first ideas.