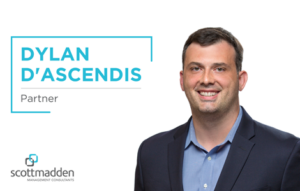 ScottMadden, Inc., one of North America’s leading management consulting firms specializing in energy and shared services, is pleased to announce the promotion of Dylan D’Ascendis to partner.

During his time at ScottMadden, Dylan has worked on a variety of key issues, including rate of return, valuation, rate design, capital market risk, and more. Dylan is a leading expert witness in North America with respect to cost of capital and capital structure. He has testified on behalf of electric, natural gas, and water utilities in nearly 100 cases across 30 regulatory jurisdictions in the United States and Canada. He has also testified before an American Arbitration Association panel and the Rhode Island State Superior Court.

Dylan has supported numerous valuation assessments for more than 20 clients and is a certified valuation analyst as well as a certified rate of return analyst. He has co-authored articles that have been published in The Electricity Journal and the Energy Policy Journal and maintains the benchmark index for a well-known utility mutual fund.

“Dylan is a shining example of dedication to both his industry and clients. He is committed to being a true subject matter expert, and his work ethic is unparalleled. We look forward to the contributions and continued thought leadership he will provide as a member of the partner group,” says Brad Kitchens, president and CEO of ScottMadden.

Dylan joined ScottMadden as part of the Sussex Economic Advisors acquisition in 2016. Prior to that, he was a principal at AUS Consultants. He has continuously served investor-owned and municipal utilities and authorities since 2008. Dylan earned a B.A. from the University of Pennsylvania and an M.B.A. from Rutgers University – Camden.