Ryan Arrieta, a director within ScottMadden’s energy practice, is a boomerang employee. He initially joined the firm in 2012, predominantly serving energy clients within corporate and shared services. Ryan then stepped away to serve as vice president of strategic and corporate planning at Puerto Rico Aqueduct & Sewer Authority for four years. Today, he is an active member and leader of the transmission and distribution community of practice, and he is also involved in our recruiting efforts, attending the National Black M.B.A. Conference each year. Ryan holds a B.S. and M.S. in civil engineering from the Georgia Institute of Technology and an M.B.A. from the University of North Carolina.

Ryan was born and raised in Guaynabo, Puerto Rico, a suburb of San Juan. His mother was a free-spirited artist from the United States, while his father was a no-nonsense engineer from Puerto Rico. Together, 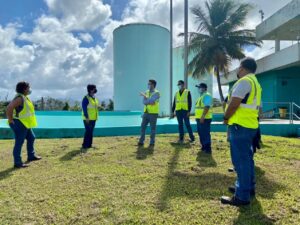 both created a childhood of balanced value and perspective for Ryan. He spent many Saturdays visiting project sites with his dad, and through this exposure to the construction industry, a “get it done” mentality was ingrained as well as a vested interest in engineering. He was also heavily influenced by his high school. He attended an all-boys Jesuit school that promoted service to others and encouraged a culture of giving. Because of this, Ryan was involved in many community service projects, establishing a dedication to his community that would he carry throughout his career.

Following in his father’s footsteps, Ryan studied civil engineering at Georgia Tech, where he received both his bachelor and master’s degrees. There, he was involved with the office of minority education development, serving as a guide to incoming freshmen. Ryan enjoyed being immersed in a new culture and introduced to new perspectives, and he graduated from Georgia Tech with a deep love for his alma mater—which he would later deploy as alumni club president in Puerto Rico. Following a brief stint at Jamaica Station in Queens, he returned home to Puerto Rico to work as an engineer in residential and commercial construction.

As development on the island slowed with the 2008 recession, Ryan pursued an M.B.A. from UNC’s Keenan Flagler, and during his second year, was approached by a classmate about a potential consulting opportunity. Following this lead, Ryan joined ScottMadden as an associate in 2012. A field engineer by trade, he quickly learned that consulting was about branding—how to present information, provide a perspective, and demonstrate an understanding of client needs. From his project directors and peers, he also learned the discipline of providing extra value, another foundational lesson that Ryan would carry forward.

In 2017, Ryan answered the call of an old friend from Georgia Tech who had just been named president of the Puerto Rico Water Authority. Stepping away from ScottMadden, Ryan assumed charge of high-profile water management projects in support of the governor’s “Plan for Puerto Rico.” During his tenure, two category five hurricanes—Irma and Maria—obliterated the island, and he was immediately pulled into recovery and reconstruction efforts. In the days and months that followed, Ryan worked tirelessly to restore water service across the island. He negotiated with FEMA and other government agencies, met 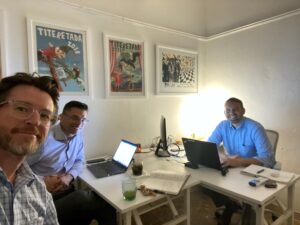 daily with military personnel and disaster relief groups, and traveled the island to better understand conditions. Through this experience, Ryan saw devastation and suffering, and he “felt the pressure of the island” depending on him and his team. Yet, he developed lasting relationships and deepened his passion for serving his Puerto Rican community, ultimately finding this work highly rewarding.

As Ryan considered opportunities after his time with the Aqueduct and Sewer Authority, it was important that his future employer be involved in Puerto Rico and allow him the opportunity to continue rebuilding the island. Ryan’s relationships with his ScottMadden peers remained strong, and he regularly connected with the consultants staffed in Puerto Rico, making his return to the firm an easy decision. Today, he is based in Guaynabo and in collaboration with fellow ScottMadden directors Tony Gonzales and Gerardo Morales has been instrumental in expanding the firm’s involvement in Puerto Rico.

Outside of work, Ryan enjoys mountain biking, surfing, and spending time with family and friends. He also loves golf, which he often uses as a means to combine work and play. Ryan continues to participate in mentor programs locally and with Georgia Tech through Mentor Jackets. And with mentorship in mind, to those newer to ScottMadden, Ryan offers, “Find a group of peers and share about the various projects you are on. Many of our clients encounter the same problems; share about the ways you are solving these.”