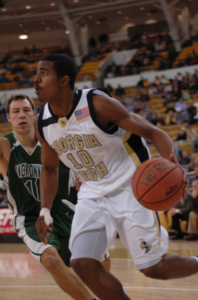 Gary Cage joined ScottMadden as a summer intern in 2015 and as a full-time associate in 2016. Today, as a senior associate, he serves as the coordinator for the human capital management community of practice and as an active member of the supply chain community of practice. Like most at ScottMadden, Gary greatly enjoys the annual firm meeting and recently participated on the 2020 planning committee. Gary holds a B.S. in Business Administration and Management and an M.B.A. from Emory University.

Effort on the Court

With Italian, Bajan, and southern Mississippian roots, Gary was born and raised in Atlanta, Georgia. While he played a variety of sports as a child and even showed great promise in track and field, everything changed when Gary discovered basketball. He fell in love with the sport and dropped all others in its pursuit. Gary was known for his tremendous effort and hard work on the court. He put in the extra time, working for hours each day to improve his game and make it to the next level. In the tenth grade, Gary transferred to a new high school to play on a highly competitive team (which included current NBA star, Dwight Howard!). Though Gary didn’t receive much playing time as an underclassman, he remained dedicated to the team and eventually found his way onto the court during his senior year. With this success, Gary’s next goal became playing in college.

Awarded an academic scholarship, Gary selected Georgia Tech due to its rigorous engineering program. With hopes of walking onto the basketball team, Gary networked with coaches and attended workouts. During pre-season try-outs, Gary impressed the Yellow Jacket coaching staff with a few great passes and his level of effort, earning a position on the team as walk-on point guard. Unable to rejoin the team as a sophomore, Gary approached the coach and asked where he most needed to improve his game. Armed with this advice, Gary spent his off-year training (and on academics, of course). Not only did Gary make the team as a junior, but he also received a full athletic scholarship. His passion for the game and his desire to compete kept him on the team through his senior year. 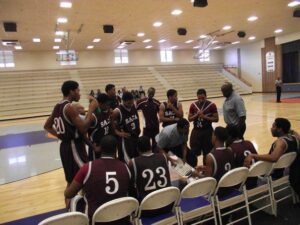 Over the years, Gary found mentors on and off the court. One such relationship was with high school basketball coach, Courtney Brooks. Personable and sound in his faith, Coach Brooks served as a father figure for Gary. He was immensely passionate about the game and taught servant leadership by example, which greatly influenced Gary’s desire to coach. Following his graduation from Georgia Tech, Gary returned to his high school as a teacher and head coach of the varsity boys’ basketball team. Over his four-year tenure, he taught math, physical education, bible, and SAT prep.

On the court, Gary shared his basketball skill and tenacity with his team. Alongside his players, he enjoyed the reminiscent adrenaline rush during highly competitive games and the excitement of a win. Much like his mentor, he sought to create a basketball sanctuary, where his players could truly disconnect from the challenges each faced; and he taught his team that basketball was a powerful tool that could be used to alter life for the better. In the classroom, Gary found his work equally as rewarding. As the cool, young teacher, he uniquely connected with his students and leveraged this “open door” to communicate the importance of higher education, faith, and strong values, like discipline and work ethic. Through these relationships and interactions, Gary recognized the powerful impact he could have off the court and the importance of maximizing this.

The Transition: From Hoop Dreams to Consulting Teams

After years of commitment to basketball, Gary used coaching as a means to gradually transition and detach from the game. As he sat down to consider his next steps, he mapped a plan which included both business school and management consulting. Following a series of events that felt much like divine intervention, Gary’s plan came to fruition. From coaching and education, Gary pivoted to Emory University’s Goizueta Business School, where he received an M.B.A., and then on to ScottMadden.

Today, Gary’s enthusiasm and work ethic make him a welcome addition to any ScottMadden team. He has also found the interpersonal skills developed through coaching applicable to his work with clients. Through his work, he keeps in mind a favorite mantra, “Look at your current situation and ask yourself, will this matter next month? Next year? In five years? Then adjust your response accordingly.” Living by this has helped Gary keep his eye on the ball.

When not hard at work, Gary enjoys connecting with friends, seeking adventure, and competing in any game. He jokes about his ongoing struggle to learn Italian, the native language of his mother’s maternal family, and one day hopes to take a sabbatical in Italy, where he can fully immerse in the language and learn more about his heritage.